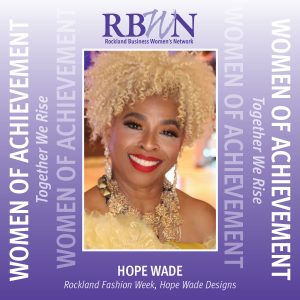 Hope Wade was born in Kingston, Jamaica to the late Superintendent Eustace Blake and his wife Mavis Blake. She has 4 siblings.

She is a graduate of Convent of Mercy Academy ‘Alpha’ High School in Jamaica, and New York City Technical College and Cooper Union College in New York.

Hope is a fashion designer and is the owner and Executive Producer of Rockland Fashion Week. She owns her store Hope Wade Designs located on N Broadway in Nyack NY.

Her red silk flute gown worn by Rock n Roll icon Darlene Love on the last Christmas performance on the David Letterman Show was inducted in the Rock n Roll  of Fame museum.

She has produced the highly successful Rockland Fashion Week for the last 3 years showcasing 32 designers to over 1300 patrons at the Palisades Center.

In May 2021 she received the first ever Woman of Distinction Award from the State Assembly of New York for outstanding leadership in Rockland County.

June 2019 HOPE WADE DESIGNS was chosen by Harlem Fashion Row in collaboration with NIKE for the first Designer Retreat for Designers of Color.

Her designs have been on the front page of every major newspaper and on television in the Caribbean.

Hope was ordained as an evangelist by Community Christian Church in June 2019 in W Nyack.

May 2017  she was the JAMCCAR Honoree for Outstanding Community Service where she received 9 Awards including a Citation from the New York State Assembly.

She was invited to present her designs in Pecha Kucha 20×20 with Rosie O’Donnell in Nyack NY.

March 2015 She competed and was selected as one of the top 3 finalists in the ‘Project Runway, A Critique with Tim Gunn’.

Hope is the President of JAMCCAR (Jamaica

She recently graduated from Leadership Rockland, Class of 2022.

She is married for 24 years to Paul Wade, vice president of MUFG Bank and they have one daughter Jasper who is a senior at Syracuse University.