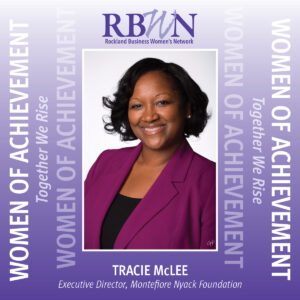 With more than 25 years of fundraising, public relations and marketing experience in the non‑profit sector, Tracie D. McLee raised millions of dollars creating strong, long-lasting relationships to benefit charities under her innovative and visionary leadership.  Throughout her career, she has managed capital campaigns and annual programs to support infrastructure, equipment and service expansion, special projects and increased annual operating funds.  She has spearheaded fundraising activities that include major gifts, corporate giving, direct mail and planned giving, while also planning and executing high-profile fundraising and cultivation events.

Tracie realized the power of fundraising while attending Nyack Junior High School. In 1989, she and her friends hosted a karaoke party and raised more than $500 to help California earthquake victims. This very first initiative ignited a passion in Tracie that continues today and has benefited regional healthcare, higher education and social service organizations.

Prior to joining the Montefiore Nyack Foundation Family, Tracie held senior level positions at St.  John’s University in Queens, Calvary Hospital in the Bronx and Center for Safety & Change, a Rockland based nonprofit dedicated to supporting victims of crime.  At the Center, Tracie reduced costs and increased revenue lowering the deficit by 30% in her first 6 months of tenure. Under her leadership, the Center’s fundraising programs increased significantly including the annual Gala which yielded 500% increase in revenue between 2016 and 2019.  During the height of the pandemic, Tracie set an unprecedented target and successfully raised 150 percent of stated fiscal goal by the end of third quarter in 2020 as well as launched the Elisabeth Voigt Legacy Society offering donors unique planned giving opportunities.  She also held senior level positions at Bon Secours Charity Health System  launching the Hospital system’s first ever Corporate Giving program which raised more than half a million  in its first year and  founded the  Hospital system’s  grateful patient program which yielded a generous first time gift of  $250,000  in  its first year.  She managed the corporate, employee and grateful patient phases of the Campaign of the Decade. This $250 million capital campaign was the largest in the health system’s history raising $25 million in the first three years of the 10-year campaign building a brand new state of the art Emergency Department facility.

Tracie served on both Nyack Center and Nyack Library Board of Directors advising on a variety of fundraising and marketing initiatives.   Tracie was the 2019 Legacy Gala Honoree at the Nyack Center as well as Outstanding Community Member Award recipient at the Nyack Chapter NAACP, Rockland Economic Development Council Top 40 under 40 Years Old Honoree and the Dedicated Employee Service Award  from Bon Secours Charity Health System, a prestigious honor given to only 10 employees out of the 5,000 employees system-wide.

Ms. McLee is a proud graduate of Nyack Public Schools and holds a degree in Liberal Arts and Theatre from the Dr. Sam Draper Honors Program at Rockland Community College, as well as Bachelors of Arts in Journalism and Public Relations from Florida A&M University (FAMU), one of the top five historically black colleges and universities in the country. She lives in South Nyack with her 10-year-old daughter, Honore (pronounced Honor) who is learning the art of development and marketing through her slime business.

Ms. McLee is so grateful to those who have supported her through the years, especially her mom. She is honored to be recognized and overwhelmed by everyone’s love and support.